“Flower of Life”. This short but very rich concept is thanks to the flower of life.
Long before Sumeria existed before Egypt built Sakkara before it blossomed the Indus Valley, the spirit lived in human bodies, dancing in high culture. The Sphinx knows the truth. We are much more than we know. We have forgotten. The Flower of Life was and is known for a lifetime. Lifetime, not just here but everywhere, knew it was the pattern of creating the driveway and exit. The Spirit created us in this picture. You know it’s true; it is written in your body, all your bodies. Long ago we hit a very high level of consciousness and memories are just now beginning to emerge. The birth of our new / old consciousness here on Earth, forever change us and take us back to the realization that there is truly only one Spirit. It is a culture that believes deeply in God, family, children, spirit, Mother Earth, a healthy environment, femininity, honesty, meditation, life on other planets and the unity of all life everywhere . The members of this new culture believe, according to the study, which are few and far between. The survey found, however, to the complete surprise of everyone, “they” are one in four adults in the United States – a staggering 44 million adults! Something huge is happening here. Now that moving the money are aware of this huge new market, you can bet that things will change. Everything will be affected, from film and TV content, to the use of energy, the food we eat and more. Even our own interpretation of reality may change eventually. You are not alone and will not take long for this fact is apparent to all. A track list for you with love! 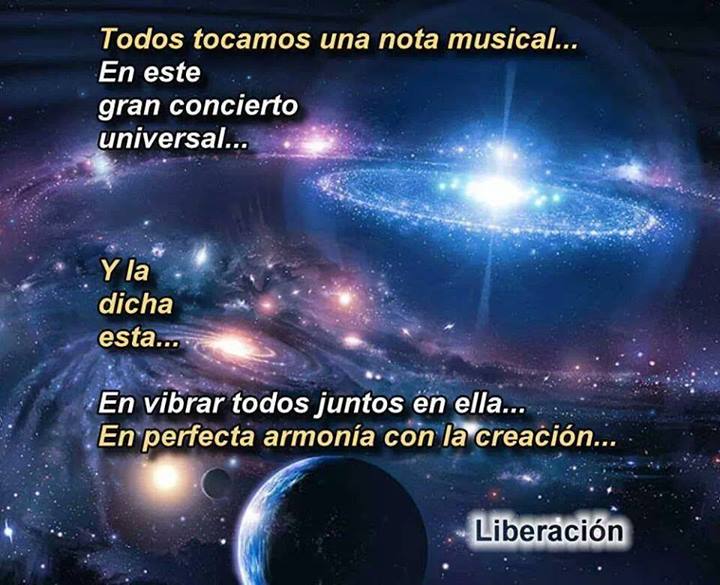 Harmony of the Spheres

We all play one musical note In this
grand universal
Concert…

And the Joy lays …

On Vibrating together with in them.In perfect harmony with creation.
Liberation !

The harmony of the spheres is an old theory of Pythagorean origin, based on the idea that the universe is governed according harmonious numerical ratios and that the movement of the heavenly bodies as the geocentric representation of the universe – the sun, moon and planets – is governed by musical proportions ; the distances between planets correspond , according to this theory , the intervals musicales.1
The Greek word harmonia tou kosmou translates as ” harmony of the cosmos ‘ or ‘ universal music ‘; the word harmony by good proportions between the parts and the whole , in a mathematical but also “esoteric” meaning is understood here as the Pythagorean mysticism. The word music ( mousike ) refers to “the art of the Muses ” and “Apollo” , ie , a ” culture of artistic or scientific spirit.” The term “spheres” is of Aristotelian origin and designates the area of ​​influence of a planet ( Treaty of Heaven) .
The theory of the harmony of the spheres of the Pythagoreans is documented in antiguos2 texts from Plato ( The Republic , 530d and 617b ; Crito , 405c ) and especially Aristotle ( Treaty of heaven, 290b12 ) . This theory continued to exert influence even great thinkers and humanists of the Renaissance to the end .
Einstein once said that while Beethoven created his music, Mozart’s “was so pure that it seemed to have been ever-present in the universe, waiting to be discovered by the master.” Einstein believed much the same of physics, that beyond observations and theory lay the music of the spheres — which, he wrote, revealed a “pre-established harmony” exhibiting stunning symmetries. The laws of nature, such as those of relativity theory, were waiting to be plucked out of the cosmos by someone with a sympathetic ear.

“>I loved to post this since many people in the world still do not know this magic yan, who shows us once again that our universe is wonderful and we are privileged to belong to it.

Here I leave some issues that resonate in Deep House me with this post.

Tracks transmit the vibe of the night life in Caracas, wish is dark but it does not lack its unique light.

The beloved capital of Venezuela, where incredible and thing can happen in only one night. Full of people of diverse styles is the glue that holds the madness together, something spice but at the same time Underground.