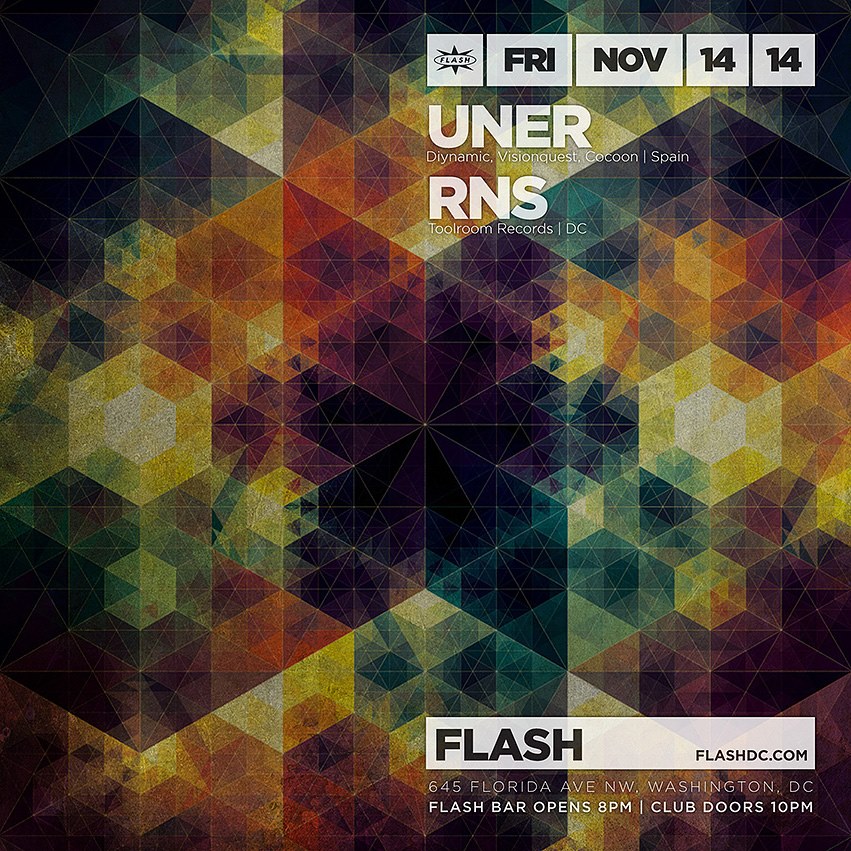 Campeón Catalan, UNER at Flash. There is no doubt the DIYNAMIC MUSIC man will bring the house down with his love of harmony and uniquely punishing beats.

UNER:
UNER is one of the most important names of the new generation of Spanish electronic music producers. His musical training allowed him to develop at a very early age a different dance music concept, based on the pleasure for harmony and the search for a unique, personal sound. This has lead him to edit for labels like Diynamic (where he’s an active member and has edited some of his most celebrated works, “Raw Sweat” and “Bassboot”, one of the most RA Top Charted Tracks in 201 1 ), Cadenza (making his debut on the label with “Pallene” and “Cocoua”, most-hyped UNER’s tracks ever), 2020 Vision, Get Physical, Cécille or Visionquest to mention a few. UNER has earned the respect of the music industry with talent and work: names like Luciano, Carl Cox or Laurent Garnier play his music on a regular basis; clubs like Berlin’s Watergate or Space, Pacha and Ushuaia Ibiza. Festivals like Sonar, Monegros or Rock In Rio book him often.

Apart from traveling around the world as a Dj, in 2012 UNER is still developing the live performance act, an audiovisual concept in which he uses state-of-the-art software and hardware (from iPads to mini midi keyboards) to explore his most solid, personal side. The artistic expansion of the Catalonian producer will go on during the following months with the release of his debut album where he’ll express his way of understanding electronic music from a musical point of view and from the center of the dancefloor. UNER’s bound to reach higher tops with the only limit of his music… so there’s still loads to see, listen and dance.

N- Not your ordinary DJ duo, Rafael Garcia and Selwyn Avelar are on a robotic mission to pump out inventive and imaginative music that pleases the electronic ear. They are a team that never gives up. These two know what it takes to follow a dream; nothing but hard work and devotion to the music they create and love.

S- Sounds like a wicked blend of Tech House with groovy bass lines and Indie vocals that progressively arouse the listener’s ear. Futuristic synths are then combined to create a strange and mesmerizing sound, provoking a heated desire to let the music take over all of your senses.